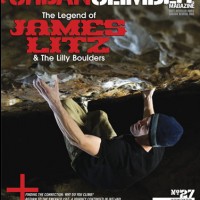 Commenter Zach recently shared a link in the comments of the post about Hard Boulders that I thought was worth mentioning here.  The link was for the online version of an article about James Litz that ran in a recent issue of Urban Climber.

I read the article when I got my copy of UC in the mail and it really struck me at the time.  I found it really interesting to finally learn more about the almost mythical hard problems at Tennessee’s Lilly Boulders that Litz put up several years ago now.  The two hardest of the unrepeated problems are Chinese Arithmetic and Tilt-A-Whirl, both potentially V13 or harder.  The story about how Tilt-A-Whirl came to be is especially funny:

…one day James called, confused. He asked if I had seen the new Dr. Topo guide to Lilly. I pulled it up on my computer and immediately saw much wrong information. I also saw that there were two V13s listed: Testify and Tilt-A-Whirl Direct. The later also had the V13 grade, as well as the Litz name, attached. Now for one thing, the boulder, named by John Young, is called Tilted World… and for the other, James had never seen the problem. I guess that’s what happens when you become an urban legend — someone sees a blank section of rock on Litz turf, it’s just assumed that he’s done a problem there. I guess in a way that’s the ultimate compliment. But whatever the reason for the error, James decided he had to make good on his name, so he went back to Lilly for a look. He called back and said he “thought he could do it.” (You know it’s hard if James only thinks he could do it.) He called again a week or two later to said he’d done it, and that it was way harder than Chinese Arithmetic. He left the name that was already in the guide.scure hard lines that Litz had done in the Southeast as well as more about Litz as a person.