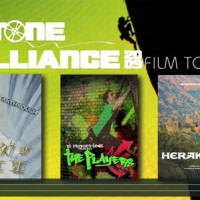 You seemingly can’t release a climbing movie these days without an accompanying film tour, and the Stone Alliance Film Tour seeks to take it to the next level by featuring 3 movies in one tour.  Comprised of Masters Of Stone VI from Eric Perlman, The Players from BS Productions and Herakleia from MVM, the tour should not dissapoint.

Here is what Brian Solano has to say about the tour on his blog:

The Stone Alliance Film Tour represents the spirit of cooperation and mutual respect that climbers have long shared with each other in our love of the natural world and the sport that connects us with it.  The StoneAlliance Film Tour is the cooperative effort of three great directors on three separate films.  We extend an open invitation to climbing filmmakers everywhere in future seasons.

Our premier shows will be held in Boulder, Co and Salt Lake City, Ut on March 11. We have a big schedule of additional shows all around the world to follow. Check www.StoneAllianceTour.com for showtimes and ticket info, as new shows are being added daily.

Here is the tour trailer: