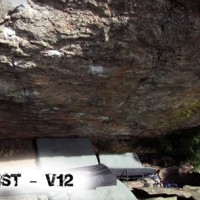 Kevin Jorgeson has been in Colorado this week in search of overlooked highball boulder problems that need FAs.  With the help of Andy Mann he found a highball-ish boulder in Eldorado Canyon and in short order The Heist (V12) was born. Quickly repeated by Carlo Traversi, The Heist should make its way into the upcoming movie Rocky Mountain Highball, which premiers April 27th in Boulder, CO.

On his blog, Jorgeson had this to say about The Heist:

A heist went down in Eldorado Canyon yesterday. A classic boulder problem, on great rock, with amazing movement, in a centralized location, of respectable difficulty, was established by a……Californian? I called it The Heist because I was amazed that it hadn’t been done before. So amazed, that I struggled to keep it on the down low for the three days it took to do it between finding, cleaning, working and sending.

The Heist takes the most obvious line, beginning on two jugs as a sit start, and following a crack up the wall until it peters out, leaving you to crimp your way up the remainder of the way. There are crimps, a mono, slopers, pinches, and a victory jug. What more could you ask for!?!

Check out Jorgeson’s blog entry for more on this problem including several high quality photos.