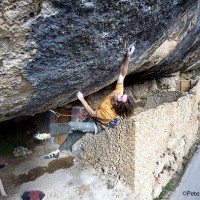 Big Up Productions is hard at work in Spain filming their next movie Progression.  As usual, Chris Sharma is one of their main subjects, but we will be treated to more of a European flavor as well.  Adam Ondra and Daila Ojeda, both of whom made brief appearances in Dosage V, are also going to be featured.  In their latest blog entry, Big Up has the inside scoop on some of the lines they have been filming.

They caught Adam Ondra making the first repeat of Sharma’s 50 meter 5.15a Papichulo, a route Ondra said felt as hard as another 5.15a he did recently, Open Air.   Despite the fact that both Ondra and Sharma are both climbing at a very high level, it is interesting to hear about their differing physical builds and differing climbing styles:

Adam [Ondra] is 16 years old, long and skinny and smart and focused on his goal of repeating all the hard routes he can. He climbs incredibly fast and precise, and barely shakes out. On decent holds where Chris rests for 5 minutes, Adam gives two shakes and goes.

As for the man himself, Chris Sharma has a slew of potential 5.15 projects he is working.  Next to Papichulo is another endurance route called Mamachichi that has a “potentially heartbreaking boulder problem on fingertip slopers at the top of the crag”.  Sharma is also working a route called First Round First Minute that seems to be more in the style of routes like Dave Graham’s Coup De Grace (5.15a).  Only 50 ft. long, First Round First Minute features a series of difficult boulder problems with few opportunities to stop and shake out.  If he pulls off the FA of this route before an upcoming extended trip to Asia, it could be Sharma’s 3rd 5.15b FA in the past 6 months after Jumbo Love and Golpe De Estado.  Big Up has also done some filming of Sharma on one of the other 5.15’s he opened recently, Demencia Senil.

Last but not least, Big Up filmed Daila Ojeda on her recent 5.14a FA called China Crisis.  Be sure to check out the Big Up blog for all the details.

For more pictures of Sharma on several projects in Spain, check out this article at 8a.nu.