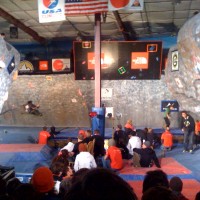 One of the highlights of our recent trip to Colorado was being on hand to watch the Adult Open Finals on Saturday night.  Last year’s show was pretty good, but I think that the 2009 edition of Adult Finals was even better.  The Spot was packed with energy, but not overly packed with people like last year.  To me the show came off tighter and faster than in 2008, with very few lags in the action.

As the dust settles after a big comp like ABS Nationals, it is always interesting to see how the climbers themselves felt about the comp.  Given the increasing number of climber blogs, this is easier to do than ever.

One of the main topics of discussion has been the scoring system.  For an explanation of how it works, see my post from Monday.  As far as the athletes are concerned, the response to the system is decidedly mixed.  On the one hand you have Jon Glassberg who found the system to be “absolutely terrible” while on the other hand you have Sean McColl who loves the ISFC format.  At this point it seems unlikely that the system will be changing any time soon so the athletes are going to have to learn to adapt.

And what about those injured climbers?  Some of the athletes came into the comp banged up and unfortunately at least one left with a serious injury.  The most well known of the pre-comp injuries was, of course, Paul Robinson’s broken ankle he suffered back in October.  Despite not doing much climbing these past 4 months and not being 100% confident in his ability to fall without reinjuring himself, Paul placed a very solid 2nd.  You can read more from Paul on his new Deadpoint Mag blog as well.

There was also the little issue of Daniel Woods having a large boulder fall on his arm earlier in the week while climbing at Carter Lake.  Like any good rumor the size of the boulder ranged from 300 lbs to 800 lbs in the different stories I heard, but I think it’s safe to assume it didn’t feel all that  great no matter what the size.  Woods is either a fast healer, a total beast or likely a combination of the two as he crushed all 8 problems (qualifiers + finals) at the comp in 9 total tries.  Man’s Game!

Unfortunately, a couple of climbers left the comp less healthy than when they arrived.  Ethan Pringle looked like he suffered a pretty painful shoulder injury while attempting the “rose move dyno” on Men’s #4.  He is in the process of having the injury evaluated, but it looked pretty serious at the time.  The other injury of note that happened during the comp was that of Laura Griffiths.  She was unable to finish competing after she injured her ankle on a fall from Women’s #1.  She tried to suck it up but had to throw in the towel while attempting Women’s #2.  I’d like to wish a speedy recovery to both!

Finally, there is the view of the comp from the vantage point of the routesetters.  As usual, Jamie Emerson has that angle covered.  From a spectators point of view I agree with him that the setting worked out really well.  For the men, I’m not sure you could have asked for much more.  The last problem had flare and its sole flash came from one of the last competitors (Daniel Woods) to seal the victory.  On the women’s side of things the problems were a tad too difficult, and due to the scoring system there wasn’t as much of a clear separation as there was for the men.  It was still pretty entertaining though.

For additional thoughts on the routesetting as well as thoughts from several of the athletes, check out the Five Ten blog.

If you weren’t at the comp and are wondering what things looked like, don’t fret.  There are almost as many people taking pictures or videos at these comps as there are people competing.  Here are a few of the places to take in more visual stimulation from ABS 10 Adult Finals:

I’ll update this list as I find more places with pictures or video.  If you know of some, feel free to pimp them in the comments.