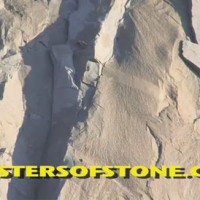 The sixth installment of the legendary Masters of Stone series of climbing movies is slated to be released this spring.  Previous installments have famously chronicled the exploits of the late Dan Osman as well as a young Chris Sharma climbing Surf Safari (thought to be 5.14a at the time).  Here is what the Masters Of Stone website has to say about the upcoming movie:

Once again, Masters of Stone breaks through to the cutting edge of the sport. Harder, Faster, Bolder, Newer, and more…six points of breakthrough in all….to enter the realm where human becomes superhuman … Masters of Stone.

Yuji Hirayama and Hans Florine set a new speed record on the Nose of El Capitan in Yosemite. Leaving all the common practices and protections of climbing behind, they simo-climb mind-bendingly fast, stretching their lead-outs by 60, 80, even 150 feet at a time as the crowd screams, “GO!” from below. This is the Super Bowl, Olympics, and Boston Marathon of rock climbing, all rolled into one. Here’s how they broke the record at 2:43:33 on 2900 vertical feet of the world’s finest rock.

Kevin Jorgeson puts up one of the most stunning highball boulder problems in the world at Lake Tahoe, California. Sean Jones adds a new inspiration rating to his first ascents on Half Dome and Ribbon Falls. BASE jumping way too close to the ground, parkour on rock, free-soloing, roped free-falling and many more breakthroughs…

More than any other sport, rock climbing continually redefines its rules and resets its limits. Yesterday’s “impossible,” becomes today’s warm-up as advances in mental and physical mastery combine to break new ground. Every few years the MASTERS OF STONE series delivers a new episode that captures these breakthroughs in a tasty mix of music, character, commentary and, above all, visual action.

Climbing Magazine’s website has 3 short preview clips from Masters of Stone VI of Hans Florine and Yuji Hirayama during their record breaking ascent of The Nose on Yosemite’s El Capitan.  The clips are broken down into Part 1, Part 2 and Part 3.

I have to say that I was actually surprised with how slow it seemed they were moving.  Then again, it is a marathon and not a sprint when you are trying to climb 3,000 feet without stopping.  I think people might also be surprised to see how little actual free climbing takes place (at least in the part shown in the preview).

You’ll be able to see Masters of Stone VI along with The Players and Herakleia on the upcoming Stonemasters Film Tour 2009. 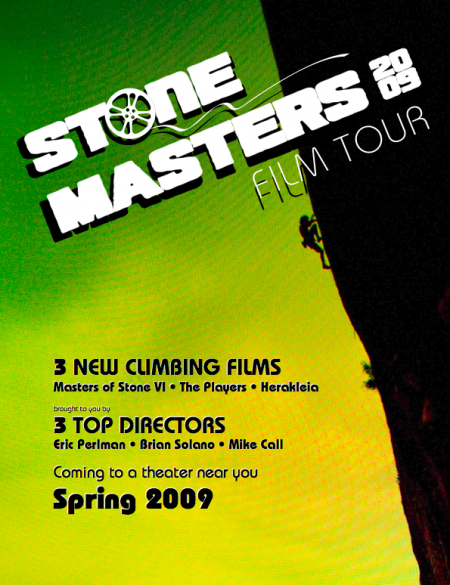 Leave a Reply to Julian Click here to cancel reply.