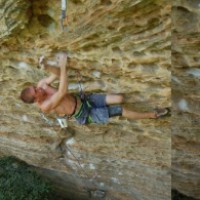 Anytime there is an up and coming climber from the midwest, you KNOW I am going to pimp them hard.  Brad Weaver is a climber from Bloomington, IL that had a great 2008.  I’m hesitant to give him too much props because he is from Illinois, but in this case I’ll make an exception since he climbs way harder than I ever will.

Most notable among his 2008 ascents were his repeat of Fifty Words For Pump Right (5.14c) and his 2nd ascent of Joe Kinder’s Southern Smoke (5.14c), both at Kentucky’s Red River Gorge.  Here is some video from Spencer Victory of Weaver’s send of Fifty Words (in the summer no less!):

After the route climbing season ended at the Red, Weaver moved on to the boulderfields of the south where he has quickly sent problems up to V12.  Soon he will be heading out west to climb in Utah for the next 6 months.  You can follow along with his trip on his recently started blog.

← Dave MacLeod Repeats “Walk Of Life”
Cult Followings Not Paying Off Like They Used To, Alpinist Magazine Sold For $71K →