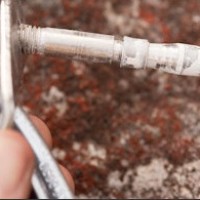 A Cautionary Tale About Bad Bolting

Well known Australian photographer Simon Carter has an interesting post on his new blog about a fatal sport climbing accident that occurred recently in Australia’s Blue Mountains. I highly recommend reading the entire post as Carter goes into great detail, but I will attempt a brief recap here.

The gist of the accident is that the climber, Nick Kaczorowski, was on a multi-pitch sport route when he found that he had deviated from the proper bolt line onto an unknown line of bolts.  Unable to climb a blank section of rock, he went in direct to a bolt in order to attempt to stick clip the next bolt.  This would allow Kaczorowski to aid past the difficult section and continue up the pitch.  As he did this, the bolt he was clipped into pulled clean out of the wall causing him to fall.  As he fell past his belayer, his rope was cut on a sharp edge running along the base of the belay ledge causing him to fall to his death.

Obviously all climbing accidents are a sobering reminder that we can all be more careful, but the fascinating part of this accident story is the issue of how this particular route was bolted.  I think it is safe to say that many of us that sport climb often place near blind faith in bolts of whose origin we have no idea.  We tend to assume that in general bolts are pretty bomber.  Unfortunately, in the case of Kaczorowski’s accident this proved not to be the case when Simon Carter went back and examined the bolts at the accident site:

So next I decided to test the first bolt, the one that they had belayed off. This time I clipped a quick draw to it, and with my hand, gave it two gentle tugs outwards before it popped out. Sickened, I put the bolt back in and attached a warning sign to this bolt (written on piece of wood) as a temporary measure until all the bolts on this route can be removed.

The fact that these bolts were so poorly placed begs the question of how the belayer was not also pulled off the wall:

Apparently the route in question had been bolted by visiting climbers who were either not finished with the route or were not aware that the Blue Mountains sandstone generally requires glue in bolts instead of expansion bolts.  Obviously all climbers assume any risk involved with climbing of any kind, but this accident raises an interesting question of whether or not someone could be held responsible for potentially negligent bolting:

Still, I’m having trouble getting past thinking that the bolting on this route was more than a little irresponsible.  For a visiting European climber the lure of acres of unclimbed rock must be great, but I think it exceptionally poor form to visit an area, totally ignore the local ethic and what you are told by the locals, spend days placing bad bolts, and then bugger off again without providing a proper warning.

← ClimbIdaho.com: Bouldering Videos From Idaho And Beyond
New Blog From Matt Wilder →

15 Responses to A Cautionary Tale About Bad Bolting