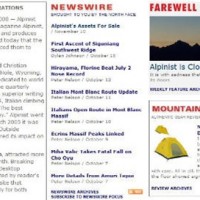 Alpinist Magazine Coming Back In March

You might be asking yourself why I continue to post about a climbing magazine like Alpinist that so few people cared about it went out of business.  It’s a good question, but I find the Alpinist saga to be rather fascinating…and I have an expensive 4 issue subscription with 3 issues still owed to me.  Plus the magazine happened to be quite good.

Given the dismal state of the economy and the the fact that Alpinist’s prior business model wasn’t all that successful, most people weren’t sure what to make of the recent news that Alpinist’s assets were purchased by the publishers of Backcountry Magazine.  I think the conventional wisdom was that there was no way Alpinist would be back in its previous form, but via Dougald MacDonald’s blog comes word that the new publishers intend to bring it back mostly unchanged:

Jeffersonville, Vermont—January 16, 2009—Height of Land Publications (HOL), owners of Backcountry and Telemark Skier Magazines, closed on a deal today that lays the groundwork for the resurrection of Alpinist Magazine.

Alpinist, a premium quarterly celebrating mountaineering and the climbing life, closed its doors this fall, just prior to the release of Issue 26. The new owners, HOL, plan to release Issue 26 on March 1, and will honor all current subscriptions.

“Alpinist fits perfectly into our family,” says HOL president and publisher Jon Howard. “We feel climbers, mountaineers, and backcountry and freeheel skiers all share the same DNA. It’s, at times, about being bold; at times about being cautious. Kind of like how we do business.”
And at HOL, they feel it’s a great time to be bold.

Jon and HOL partner and Backcountry editor Adam “Howie” Howard are currently in negotiations with the editorial staff at Alpinist to determine who will be at the helm.

“We’ve asked Christian Beckwith to stay on as Editor,” Adam says. “I reached him in Mexico where he’s doing some non-profit work. After seven years of grinding, he’s enjoying some relative downtime. But he’s genuinely excited that we’re carrying his creation forward. We’ll be meeting in person in the next few weeks. Should he not come on full time, Alpinist readers can be assured that someone of comparable skills and pedigree will fill his shoes.”

Readers can also look forward to the same quality of paper and a large format size.

“We want to honor what the Alpinist team has done,” Jon says. “It’s a piece of art. And we plan keep it that way.”

Seems like good news for anyone with any outstanding subscription!

7 Responses to Alpinist Magazine Coming Back In March