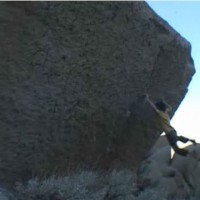 Here is one last video from the footage that Paul Robinson was kind enough to send along.  This time up he is depicted repeating The Swarm, an “easy” V14 at the Buttermilks outside of Bishop, CA.  Along with Hueco’s Esperanza (V14), The Swarm is the most repeated V14 in the U.S.

Somewhat notable is that on the same day he did The Swarm, Paul also repeated the Mandala SDS (V14).  Those prone to hyperbole might say that this was some sort of world record, however I think it is sufficient to simply say that Paul was having a pretty decent low gravity day.  Nice work Paul!

Paul Robinson Sending The Swarm (V14) from ClimbingNarc.com on Vimeo.

Seeing as I should have posted all the videos on Vimeo in the first place, here they are again:

Paul Robinson Sending A Maze Of Death (V12) from ClimbingNarc.com on Vimeo.

Thanks again to Paul for the footage!