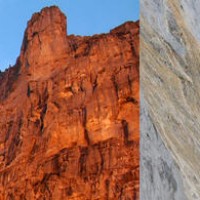 A segment shot, directed and produced by Sender Films of Dean Potter’s freeBASE of the North Face of the Eieger will be airing this weekend.  It will be featured on the Saturday, October 11th edition of NBC’s Jeep World Of Adventure Sports at 2:30 EST.

If you want a sneak peak, check out a recent intervirew Potter did with Outside Magazine.  They also have some video of the climb that should get get your fingers sweating.

Potter is also featured in Sender Films’s upcoming release The Sharp End which is shipping this Friday.  Look for a review on Climbingnarc.com soon.