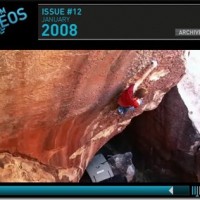 A few noteworthy pieces of bouldering news for you: The climbing at the beginning is controlled with small moves between small edges. Half way up, with 20’ of air below your heels, you dig your fingers behind a ¼ pad edge, backstep with your left foot, look up at the pocket, and commit. Miss the pocket and you become a human pinball. Stick the pocket with only 2 fingers and you have a chance. Ideally, you get three fingers in this pocket made for two, grab a narrow pinch next to it, and cross to an Oreo sticking out of the wall. Actually, an Oreo would be thicker than this hold. It’s more like a Ritz cracker. Lock this off to the arête and you’re virtually home free. Check out the MVM for the full video