Last weekend, Amy and I took 5 kids from our climbing team for a long weekend to Horse Pens 40 in Alabama. Having been there a few times myself I was really excited for the kids to be able to get a feel for some “real” bouldering. After making the 12 hour drive and getting camp setup, we gave the kids a nighttime tour of the bouldering fields to get them even more excited for climbing on Friday. 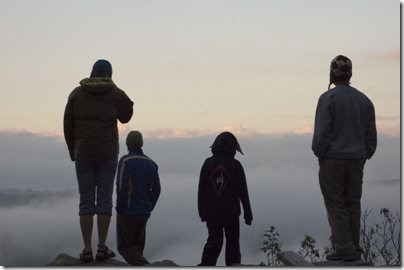 Friday morning we awoke to damp conditions that quickly dissipated leaving temps comfortably cool. We warmed up at our usual spots in the Ten Pin boulders. It is always a good feeling that first time you grab a sloper at HP40 and it just sticks to your hand. Of course this also starts the countdown to the point in time where your skin can no longer handle climbing. For us Wisconsin folk that moment always seems to come all too soon.
Tony wasting some skin on Sandbox (V2): 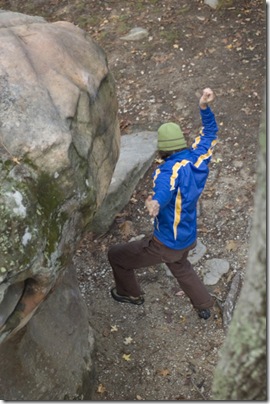 Just within the confines of the Ten Pins boulders are enough problems of all difficulties to keep everyone interested. From the fun easier warmups to Sunbeam (V3), The Beach (V4), Popeye (V5) and Hugs and Kisses (V8), there is basically something for everyone to get worked on. Of course if you get bored there you can walk 10 yards in either direction and be at the Front Slabs or Ghetto Superstar boulder.
Tony sticking the crux on The Beach (V4) 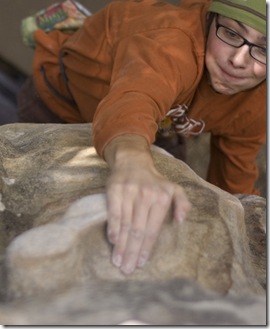 After warming up we started to wander our way through the different areas. We stopped at Ghetto Superstar for a bit and I gave The Thief (V7/8) a brief effort but my off the couch skills weren’t really well suited to the small crimps. Luckily the powerful moves between big holds on Mulletino (V5) were suited to my off the couch skills, and a few of us made quick work of this fun problem that I had really overlooked on previous visits to HP40.Once we were done at Ghetto Superstar we made our way to the Slider boulder, one of my favorites at HP40. I hadn’t really planned on climbing anything at this boulder as the climbs I haven’t done (namely Slider) were too hard to attempt in my weakened state, but as usual I got sucked in. I gave Boomslang a go to see how it felt compared to 4 years ago, and it felt surprisingly good despite my spotters trying to heckle me into falling off the top out.
Eric on Boomslang (V6) 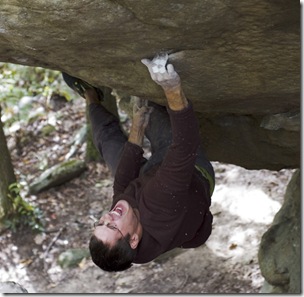 After Boomslang I spent some time watching and spotting the kids on The Wasp (V2) along with a few other problems in the High Life area. It was really cool to see the unbridled enthusiasm the bouldering brought out in them.

Kevlar on a fun V2 in the High Life area 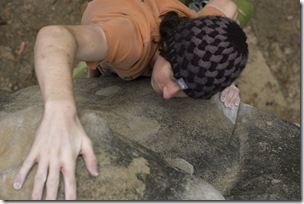 To wrap up the day we made our way back to where we began the day so that we could put some work in on Inspect Her Gadget (V7). I had done the direct start in the Spring and the traverse that Inspect… added seemed like it could add a bit of fun while perhaps lessening the danger of dabbing that was ever present on the direct version. After leeching beta from Tony and Danny I was able to send the full problem on my second go from the start which makes me question the V7 grade a bit but either way it was a fun problem. I was pleasantly surprised by the fun moves the traverse added as well as how good I felt. While not pictured, Danny also made quick work and sent on his first go of Day 2.
Danny working Inspect Her Gadget (V7) 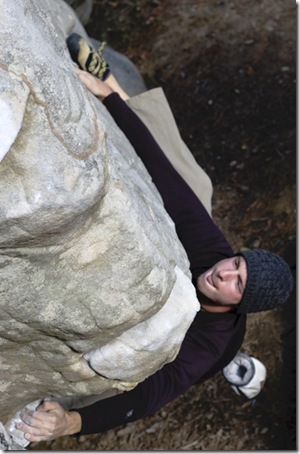 At this point everyone’s tips were near bleeding or already bleeding so we called it a day. The kids did a great job pushing themselves to new levels on Day 1, but would they have any energy or skin left for Day 2? Find out tomorrow…
Posted In: Bouldering, Pictures
Tags: Road Trips
Areas: Horse Pens 40