So I went to an SCS comp this weekend at a gym I had never seen before. I don’t really have anything bad to say about the comp itself although the fact that the results of these “qualifying” comps don’t matter at all is a bit peculiar. 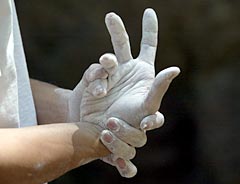 What your hands didn’t look like at the SCS comp

No, the real problem was this is yet another gym in Wisconsin that has the Utopian vision to ban chalk from being used at the gym. Instead they use the “Eco-balls” that were letting out incredible amounts of some unknown dust throughout the comp. Of course these eco-balls are basically useless, expensive, and non-reusable like chalk balls. As with the other gym that I have visited that banned chalk (that gym is now closed) the quality of the climbing suffered immensely from lack of chalk. This isn’t like climbing outdoors where you might get some friction from the rock itself. With these gyms that ban chalk the crux of most routes is not greasing off their already incredibly polished holds. Sounds like a good way for someone to get hurt…

As far as I could gather this was another case of a gym owner that was personally opposed to using chalk and therefore imposed this rule on the entire climbing population that wished to use this particular facility. I could be wrong but this was the same reason behind no chalk at the now defunct gym.

Other observations about this gym/comp:

Anyone else ever climb at gyms that don’t allow chalk?

Posted In: From The Narc
Tags: USA Climbing

One Response to Got Chalk?