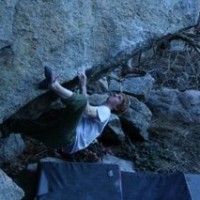 Leaving town for the weekend so here are some cool people/sites you can check out in the meantime: Jamie Emerson posted an update on his site after he recently made the 2nd ascent of Burnout. Ryan was also nice enough to put a link to my site on his page, thanks man. Scott was also nice enough to hook me up with a link on his page, thanks Scott.

I’ll be back Sunday night with the usual list of weekly spray. I also hope to have some video for you from my trip to Little Rock City last year.