Yuji Hirayama – On The Road To Slovenia 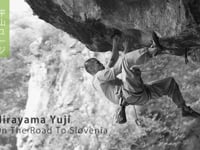 Hirayama Yuji is one of the best climber in the world. His amazing climbing life story started when he was 14 years old guy. He quit school and decided to become professional climber. In his long career he did with the most difficult climbing routes in the world.
Yuji won twice time the World Cup, where the final competition was in Kranj - Slovenia. Beautiful country reminds him a lot, especially rock climbing in Mišja Peč.
Someday, he wants to climb with friendly Slovenian climbers again.

5 Responses to Yuji Hirayama – On The Road To Slovenia