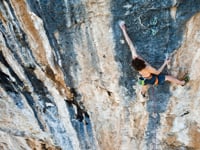 Black Diamond athlete Adam Ondra made the first ascent of Chaxi Raxi, a massive 9b line at Oliana, Spain in late April. This is likely one of the hardest sport climb in the world. We had Bernardo Gimenez on the scene to document Adam’s efforts and he was fortunate enough to be there for the redpoint. Below is the outstanding video Bernardo edited together, as well as brief recap from Adam. Stunning. Impressive. Inspiring. Absolutely bad ass. Congratulations, Adam.
=====================================

Oliana is one of my favorite areas in the whole region of northern Spain. It’s a stunning 50-meter long wall of orange and blue limestone with complex climbing. The wall dries out rather quickly, so I had the opportunity to try out one of projects that Chris bolted called Chaxi Raxi already the first day after the period of rain. It felt very difficult at the beginning, especially the very first crux. I could do every single move, but to link two of them seemed incredibly difficult. The top part seemed more possible—I could link the moves without serious problems except two of them, where I found terrible extra-powerful beta skipping two holds, until Chris told me to try it differently, a much more crimpy and static way. Though crimps are what I excel at and Chris prefers big moves on reasonable holds, our initial betas had been completely the other way around.

Getting back to Chaxi Raxi, I stunned myself that I managed to send the easier variation, skipping the first bouldery section via a detour of 7b, which could be around 9a+ on its own right. There was the time now to work a lot on the lower boulder problem and then I might be able send. But that was hard. I didn't go very well, but I steadily kept progressing, and the sixth day I manged to get through the first crux, which could a hard 8B+ boulder problem on its own. I took a rest on the tufa and continued. I made it through the crux sections, but in the end of the last difficult, being 100% confident of success, my left heel slipped. And I did not manage to get through the bottom again that day. I got through it once on my 7th day, I fell a few moves below my highpoint, as I didn't hit the hold right while making dynamic move. I got pretty nervous, since I knew I was able to send it, but I had mere one day left and there are so many sections to make a tiny mistake which might ruin my attempt and also the day, because it is very hard to link the bottom twice in a day. On the first go of my last day, I made it through the first crux somehow, got to the rest and stayed there for a few minutes. This rest is actually enormously useful for the whole route, without the place to shake out it would be undoubtedly 9b+, but it is also a place where you can easily get nervous and think about potential failure. That is what happened to me. The way I continued climbing one can't call efficient at all, but the route was tiny bit below my absolute limit after eight days of work, and despite getting pumped, I got somehow to the anchor and could enjoy the feeling of victory on the last day of the trip yet again. This is probably my hardest route I have ever done.

4 Responses to Adam Ondra On The FA Of Chaxi Raxi (5.15b) At Oliana