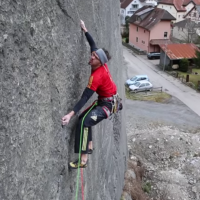 Whoa, where does the time go?  Somehow it is already October and the season for sending things in the high country in Colorado is rapidly drawing to a close.  A season that began all the way back in April with high hopes of sending my project from 2013 has dragged on for me without much success to report.  I couldn’t be more psyched about the process though.  I’ve never really projected anything in my 15 years of climbing, so the fact that my next day on this project will be day 17 of trying it is actually kind of cool1.

October also means it’s time for the 2014 Portland Boulder Rally, which is where I will be heading tomorrow to do some live commentary during finals.  Last year’s comp was pretty great, and this year’s lineup is similarly stacked with some of the best competition climbers in the U.S., so it should be another good show.  Be sure to tune in tomorrow night starting at 6:15 PM PDT for a pre-show followed by finals at 7:00 PM PDT.  I’ll be posting a link to the live stream later today or tomorrow.