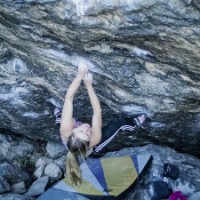 It was an exciting evening tonight in Lower Chaos Canyon and not because I was there greasing up the holds on everything or because Daniel Woods returned from an unfortunate skating incident to run a send train on a few of the harder boulders in Lower. No, the excitement was due to the fact that it was ladies’ night on the Dave Graham testpiece Nuthin’ But Sunshine (V13).

A cadre of the world’s strongest female climbers was present as Alex Puccio, Angie Payne and Shauna Coxsey were all taking turns figuring out moves and making good links. Puccio has been close to sending for some time, and indeed I think most of us have always thought she’d be the first woman to climb this particular boulder. Alas, it was not meant to be though for Puccio as Coxsey swooped in and snaked the FFA from her in an impressive effort. Look for footage of the send at some point from the ever-present BearCam. And don’t be surprised to hear soon about Puccio following suit.

Couple of nice pictures from BearCam here and here.

One Response to Shauna Coxsey Repeats Nuthin’ But Sunshine (V13)