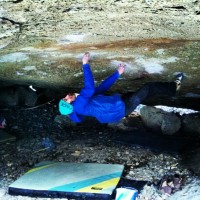 In a bit of déjà vu from 2012, Daniel Woods is in back in Japan winning comps and repeating Dai Koyamada problems at Shiobara.  After repeating as champion of The North Face Cup, Woods went to Shiobara and did the 2nd ascent of Dai Koyamada’s Hydrangea (V15).  Hydrangea (pictured at right) is the sit start to Hydra, a V13 Woods did on his visit last year.

Brett Lowell and Nick Rosen are with Woods filming for this year’s edition of the Reel Rock Film Tour so look for more on his trip later this year.  Additional photos of Woods on Hydrangea can be seen here.

Woods is scheduled to be back in the U.S. by next weekend to defend his throne at ABS Nationals 2013, and given his success at that event over the years and the fact that he appears to be in good form, he should be a solid favorite to win that event again this year.