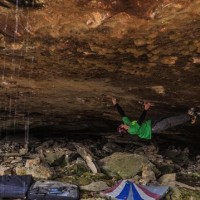 2005 sure seems like a long time ago.  Chris Sharma had dreadlocks, still wore Five Tens and still cared about bouldering.  It was during this period that Sharma did the FA of Witness The Fitness, a long roof on private property in the Ozark Mountains of Arkansas that, at V15, was the hardest problem he’d done up to that point.  The problem was featured in Dosage 3, footage of which you can now see here. Witness The Fitness had seen one repeat (Fred Nicole) and plenty of broken holds in the ensuing years leaving many on the internet to speculate the problem may not be doable any longer.

The trio of Daniel Woods, Jimmy Webb and Paul Robinson made the trip to Arkansas to find out for themselves what was what, and as Big Up Productions reports in their newly redesigned site, Daniel Woods was able to figure out a new sequence to nab the problem’s third ascent after three days of effort.

Video was captured of the send so it will be very interesting to see what this problem looks like in 2013.

Update – More from Woods himself from his Facebook page:

Day 3, Jan. 5, 2013, Witness the Fitness was reborn. The feeling was euphoric and no words can describe the emotions of doing this line. Chris Sharma paved the way by establishing WTF, in which motivated myself at a young age to try it. When WTF first came out, it looked impossible, but so good. Thanks Chris! It is interesting to see the progression of WTF. Sharma made it a realization until it broke. Fred repeated it using smaller holds in the beginning section, but same as Chris for the upper crux (stepping the difficulty up significantly). Now I have done the line with both cruxes broken. I never tried it in it’s original state, but by looking at the holds in Dosage 3 and comparing them to its present state, the line now is totally new moves. I feel like WTF is in solid form, but there is still that potential for holds to break.

and most important in all this:

Witness the Fitness is also on private property. We were able to get permission from the land owner to try it. That being said, respect his property and ask before trying.