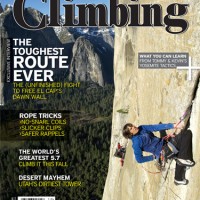 Fall is about to get into full swing out in Yosemite which is usually a good signal that Tommy Caldwell and Kevin Jorgeson will get back to work on their Dawn Wall project on El Cap.  This season will be a bit different though as Jorgeson is going to be rafting down the Grand Canyon for the next few weeks leaving Caldwell to fend for himself leading them to add a third member to the team:

After talking with Tommy, we have decided to grow the Dawn Wall team and take more of an expedition approach. With more than two team members, we will have more energy, more back up, more talent, and all around good times on the wall. So, we are super happy to have Jonathan Siegrist joining the team! Jonathan is such an awesome guy, with such great talents, Tommy and I couldn’t be happier to have him up on the wall with us….For the month of October, Tommy and Jonathan will be battling away on the crux pitches. As soon as I get off the river at the end of October, I’ll be driving straight to Yosemite to join them!

Caldwell is fresh(?) off a victory in the recent 24 Hours of Horseshoe Hell competition that saw him and partner Sonnie Trotter put down a cool 302 pitches in 24 hours, and Siegrist seems to be in peak form after a summer spent climbing desperate face climbs in Idaho and Wyoming in addition to his repeat of Caldwell’s The Honeymoon Is Over on Long’s Peak.  As for Jorgeson, Beth Rodden spent the winter before she climbed Meltdown shoveling snow, so perhaps 3 weeks paddling will be just the training Jorgeson needs?

Update:  More words on the team from Caldwell and Siegrist in this update by Climbing.com