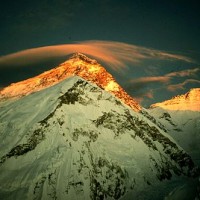 As you may or may not know, reading about Mt. Everest is what got me into rock climbing in the first place.  Reading Into Thin Air in High School English class led me to the local rock climbing gym and the rest is history.  While rock climbing has consumed much of my attention since then, I’ve always taken a keen interest to reading about mountaineering expeditions new and old.

So, it was with particular interest that I received a press release late last week announcing that Sam Elias and Emily Harrington would be joining a North Face-sponsored expedition to Mt. Everest this spring.  Both Elias and Harrington are well-known in the rock climbing world for their redpoints of routes up to 5.14, but their addition to an expedition to Mt. Everest certainly caught me by surprise.  As far as I can tell they don’t have much mountaineering experience, nor do they have much experience above 5,000m let alone the nearly 9,000m they’ll encounter if they make it to the summit.  That said, their dedication and determination has seen them achieve a lot of amazing things thus far in their lives so it wouldn’t surprise me if they did succeed.  Best of luck to them both and I know I’ll be following their trip closely.

Harrington did a interviews with Climbing and friend Paige Claassen that are worth checking out and the press release about the expedition can be read below.

WASHINGTON—Continuing his legacy of renowned ascents, famed mountaineer and The North Face athlete Conrad Anker is aiming once again for the top of the world as he leads a team of climbers setting out to reach the summit of Mount Everest this spring.

Steeped with a history unlike any other, Everest has been perhaps the most sought-after summit for climbers in the world. Anker, along with fellow The North Face athlete and National Geographic photographer Cory Richards, will revisit Everest’s storied past as they attempt to repeat the historic climb of the 1963 National Geographic-sponsored American Mount Everest Expedition (AMEE) almost 50 years after the first American ascent to the summit via the West Ridge.

Anker and Richards will climb Everest’s West Ridge, a route seldom visited. Their alpine-style climb will be documented by Richards for a feature in National Geographic magazine to be published in early 2013 and covered in real time on the magazine’s May issue iPad app starting April 16. It can also be followed online at the partners’ websites and on Twitter via #oneverest.

Anker and Richards’ efforts will be complemented by a second team of climbers from The North Face global athlete team, including Kris Erickson, Hilaree O’Neill, Emily Harrington and Sam Elias. This team will attempt the summit simultaneously on the Southeast Ridge of the mountain. They will focus on mentorship within the climbing and mountaineering communities. Erickson and O’Neill, who have climbed some of the world’s most challenging mountains, will provide insight and education to the younger Elias and Harrington, who have traditionally been focused on rock and ice climbing.

The scientific portion of the expedition involves geologists from Montana State University on the Southeast Ridge team and medical specialists from Mayo Clinic at Base Camp.  On the Southeast Ridge team will be Montana State University professor and structural geologist, Dr. David Lageson. He will focus on research and education in partnership with Philip Henderson of the National Outdoor Leadership School and Travis Corthouts, a geology graduate student who will conduct research from Everest Base Camp. Also part of the Southeast Ridge team will be National Geographic writer Mark Jenkins. Some members of this team will contribute to an online science curriculum developed for fifth graders by Montana State University. “The West Ridge of Everest is a demanding and challenging route. Sharing the science of Mount Everest is a goal of our team, and combining our two objectives in one expedition is a fitting tribute to the 1963 AMEE team,” Anker said. “Everest remains a beacon of exploration. The ability to share the experience of Mount Everest with school children while conducting science is the foundation of our expedition.”

Continuing the scientific theme, at Base Camp a team of five Mayo Clinic researchers will study climbers from both teams, recording real-time data for a comprehensive look at the impacts of high altitude on human physiology.
The expedition is sponsored by National Geographic and The North Face, with support from Montana State University.

“National Geographic is thrilled to support this exciting project, which takes a historic achievement we funded — the 1963 American Mount Everest Expedition — and uses it to frame a modern-day attempt at the summit. New technology allows us to do something that was impossible in 1963 — bring National Geographic magazine readers along in real time, with video, photographs and blogs from the expedition in the magazine’s May issue app for iPad,” said Rebecca Martin, director of National Geographic’s Expeditions Council. “Supporting this expedition is particularly meaningful to us because Conrad and the teams seek to not only replicate what has to date been a singular achievement but also to expand scientific understanding of Everest and instill a deeper appreciation of the Himalayas through educational outreach.”

“At The North Face, we are excited to work in partnership with National Geographic on this momentous expedition. We are proud to see our athletes Conrad, Cory, Kris, Hilaree, Sam, and Emily embarking on a journey that truly exhibits the evolution of high-altitude mountaineering and honors its rich past,” said Todd Spaletto, The North Face president. “We see this expedition as a tremendous step inspiring outdoor exploration in communities around the world.”

The team will re-survey the summit of Mount Everest with the latest and most precise GPS equipment available to obtain a reading of the current height of the mountain, which was last reliably measured in 1999. This effort will not only quantify the vertical and lateral motion of Everest but also should shed light on the compression between the Indian and Eurasian tectonic plates that lie beneath the mountain. The team also will study the makeup of Everest’s summit pyramid, taking samples to determine the composition of its rocks and the presence of the fossilized marine animals.

Scientific Goals — Medical and Gear Technology
Mayo Clinic’s team — three scientists, a physician-researcher and a technologist — will focus on three conditions common to many on Everest: muscle wasting and exhaustion; pulmonary edema (water in the lungs); and sleep disorders. The team’s findings will help extreme athletes and medical patients, as these conditions mimic symptoms experienced by people with various chronic disorders, including chronic heart problems. A fourth focus: testing a remote monitoring halter developed by Mayo Clinic. This prototype is designed to enable long-distance monitoring of patients between their homes and the clinic. Follow Mayo research at: http://advancingthescience.mayo.edu.

Educational Goals and Resources
In addition to conducting geological research, the MSU team has created an eight-week science curriculum that focuses on geology, glaciology, climate change and other topics that allow classrooms to mimic the research and observations of the Everest team. Developed with a grant from the National Science Foundation and support from The North Face, National Geographic and other sponsors, the curriculum is targeted at fifth graders, but is available to teachers of any grade. From the beginning of the trek to the summit, the Southeast Ridge team will be sharing educational videos and blog posts for students via MSU’s website. An outline of the curriculum that educators can follow while the climbers are on the mountain is available to the public at www.montana.edu/everest.