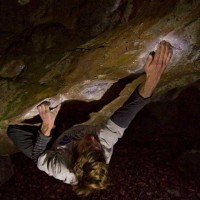 Running around Hueco Tanks the other week I came across the Fred Nicole testpiece Nagual (V13), and other than making my fingers hurt just looking at it I was reminded of Paul Robinson’s 2007 flash of the problem.  If world records existed in climbing Robinson’s flash would likely have held the record at the time, with perhaps Adam Ondra’s 2009 flash of Confessions (V13/14) or his flash of a pair of V13s in Rocklands giving Robinson a run for his money in subsequent years.  Or maybe somebody else flashed something given a high number?  I don’t know.  What I do know is that yesterday Daniel Woods raised the bar on this discussion.

Fresh off a repeat of Dave Graham’s Big Paw (V15), Woods paid a visit to Murgtal, Switzerland home to another Fred Nicole testpiece called Entlinge.  Originally given a grade of V15, Entlinge climbs a steep prow as demonstrated by Bernd Zangerl who did the problem’s 2nd ascent:

Bernd Zangerl on the 2nd ascent of Entlinge

After a beta spraydown from Guntram Jörg, who repeated Big Paw the same day as Woods, Woods pulled on and sent Entlinge on his first try.  In a comment to 8a.nu, Woods noted that the problem fit him perfectly and that he felt a grade of V14 may be more appropriate.  Prior to yesterday Woods’ hardest flash was a handful of V12’s, so this Entlinge flash is quite the step up on a personal level for Woods.

Woods’ ascent, as well as many of the other recent happenings in Switzerland, are all being filmed either for a project Chuck Fryberger is working on or for the forthcoming movie Welcome To The Hood.  Stay tuned…

← Successful Trip To The Red River Gorge For Jorg Verhoeven
“Why On Earth Don’t I Live Here?” →