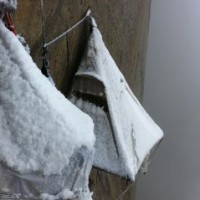 Tommy Caldwell’s push to free a new route up El Capitan’s Dawn Wall is 10 days old now and the events over the past few days were really something.

In between bouts of snow and freezing weather Caldwell set to work on pitch 12 which was his highpoint1 during last year’s push.  Here’s how he described Saturday’s efforts on pitch 12 in an update on his Facebook page2:

That was a intense one today on pitch 12. First I pulled a few pitons and took big falls. Then I broke a few footholds. Five tries later I finally had the new sequence through the bottom worked out. Then I fell at the very end… Twice. Temps never got above freezing. Eight tries in all and no send. The good news is that I am feeling strong. This one just wasn’t in the cards for me today.

Sunday was spent hunkered down in the ledges as pictured above and Monday it was back to work on pitch 12:

So now it’s on to the heretofore unclimbed “thumbdercling” crux pitches 13 and 14 across the Molar Traverse.  Those pitches are followed by one more 5.14 pitch and then the route lets up with some “easier” climbing in the 5.13 range.