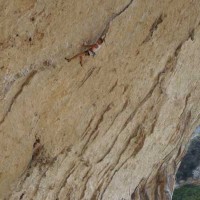 5.14c For Sasha DiGiulian In Rodellar

After taking 3rd in the Youth World Championships Sasha DiGiulian moved on to Rodellar, Spain and success was not far behind.  She onsighted the 5.13c first pitch of Cosi Fan Tutte, and after a few subsequent tries she was able to clip the chains on the full 55 meter line for her third 5.14c just this year. Writing on her blog about the ascent DiGiulian called the route “the most beautiful climb” she’s been on and described the main crux like this:

Almost immediately after the end of the 8a+ there is the first, probably most difficult (for me at least) crux of the route. It involves a burly move from an undercling to a weirdly shaped pocket-crimp, then you hold your core tension to grab a sloped ball-type hold, move your feet so that your body is positioned well, and stab out to a crimpy undercling. After this are a few more bouldery moves into a good rest. In between this boulder crux and the next crux higher up on the route there are good holds, just in some places spaced decently far apart.

Check out her blog for the full write-up.

Update:  27 Crags caught up with DiGiulian to talk about the ascent