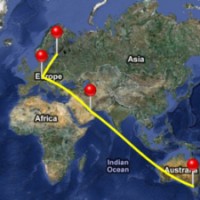 The Island Goes Down Under

After following the careers of certain well-known American climbers like Chris Sharma and Dave Graham throughout the years one kind of starts to get the feeling like man, these guys have been everywhere.  In some sense they have been fortunate enough to travel to seemingly most of the world’s great climbing destinations, but the reality is that world is still a pretty big place.

Take Graham as a specific example.  Sure he’s climbed seemingly every hard boulder in the U.S. and spent a ton of time climbing in places like France, Switzerland and Spain, but even he has barely scratched the surface of all the rock out there in the world.  He’s never been to pretty famous, well-traveled bouldering spots like Squamish or Rocklands or…the Grampians.

Well, you can cross that last one off the list because Graham rallied a crew that includes Ian Dory to make the long journey to Australia to see what all this fuss about amazing orange-streaked sandstone is about and, to borrow a phrase from Larry David,  he’s prettaay prettaaaaay prettaaaaay psyched about things:

Personally, I couldn’t handle the situation. The rock was too good, I had never seen such features in my life, and the quality of the sandstone superseded anything i had ever seen before. For a brief moment, I had a feeling of terror, wondering why on earth I had never been here before, why I had been unaware of this phenomenal rock, and what kind of opportunities for climbing probably existed on stone like this. I wave of relief pass over me, as I realized, that the awe I was experiences was just a product of the fact that this rock was in fact so new, that if I had seen it before, it couldn’t have been so stunning, as I would have been used to by now.

Also making the trip is Nalle Hukkataival who made this comment about the epic Hollow Mountain Cave link-up The Wheel Of Life that I found interesting, especially after seeing the lengthy video of Ethan Pringle climbing it:

That line is crazy long and doesn’t have much to do with bouldering if you ask me, but it’s a very unique climb and will surely get you fit for the Taipan wall.

Media types like Keith Ladzinski and Reach filmmaker Nathan Bancroft are going to be tagging along with the crew at various points throughout their journey, so I expect that we’ll be hearing and seeing a lot more about this trip in the near future.  Stay tuned…

13 Responses to The Island Goes Down Under