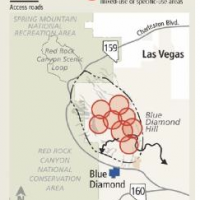 Plan For Development Near Red Rock Gets Initial Approval

Last week I laid out the proposed plan to develop upwards of 7,000 homes and other buildings just outside of Las Vegas’ Red Rock Canyon.  There was an incredible push throughout the climbing community to make our voices heard leading up to the August 17th hearing before the Board of County commissioners where the plan would be up for initial approval.  Unfortunately, as often seems the case these days, we made our voices heard, but it seems as though nobody was really listening in the first place.

The board voted 5-2 to approve a “conceptual” plan to build 4,700 homes and a business park, and with lines like this:

In the end, lawyers, not residents, appeared to sway commissioners.

Still, to deny Rhodes’ plan now, the county would have to back up that action in court with facts supporting the contention that the project should not be built and not simply point to public sentiment being against the project, said Rob Warhola, deputy district attorney.

The county has no solid data showing the project will hurt Red Rock, he said, adding that people’s feelings carry no legal weight.

in the Las Vegas Review Journal’s story about the meeting it doesn’t really give much cause for optimism.

However, according to some updates posted to MountainProject during the hearing there were conditions put on the approval relating to density and BLM access so perhaps there is still some hope?