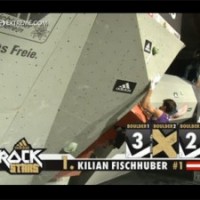 The 2011 Outdoor Retailer Summer Market starts in earnest today as the climbing industry gathers in Salt Lake City to talk shop, make deals and drink watered down beer.  Part of the annual tradition of the summer trade show of late has been a climbing comp held on the roof of a downtown hotel.  Despite the sweltering heat, the event has been a great way to showcase the sport’s best who all are generally already in Salt Lake conducting other business.  You’ll remember that it was just two years ago that the event was streamed live for the first time, and we all got to watch Daniel Woods’ freakish display of strength on his way to victory.

So, on the heels of successful comps in Boulder and New York City, the UBC Pro Tour was set to carry that momentum to Salt Lake City to put on a great show.  A lot of the athletes that couldn’t make it to the stop in NYC like Woods, Robinson and Johnson were going to be in town so the field would have been one of the better ones we’ve seen all year.

There’s just one small problem. Citing a budget shortfall ne2c, the group that puts on the UBC Pro Tour, pulled the plug on the event 3 weeks ago:

Here’s sentence I never wanted to write: Due to a budget shortfall, the UBC event scheduled for the OR Summer Market in Salt Lake City has been cancelled. Many of you knew that the event was on the ropes or have heard rumblings that there has been trouble in the air, and many more went to bat with us to try to make sure that this didn’t happen, but this time we just couldn’t rally the industry support to pull it off in 2011. Our sincerest apologies go out to everyone and anyone inconvenienced by this cancellation of this event and our sincerest thanks go out to everyone who has supported it over the years and who will continue to do so in the future.

Most important, it should be crystal clear that NE2C Productions, USA Climbing, the Outdoor Retailer Summer Market, Salt Lake City and the State of Utah are already hard at work to make sure that this event is a cornerstone of the OR Summer Market again in 2012 and every year after that going forward. The UBC Pro Tour at the OR Summer Market will return bigger and better than ever before, and that’s a fact.

So, if I were reading this, my first question might be… wait, WHAT?

The post goes on to spin the situation as a positive citing the need for the industry and the climbing community to re-focus their efforts behind this sort of thing.  I’m not plugged into the industry that well, but from the viewing public’s perspective it’s hard to think of this as a positive, at least in the short term.  What it means for the long-term viability of large scale national climbing comps remains to be seen, but hopefully this is just a small bump in the road.

In contrast to an event here in the U.S. that has budget problems is the recently completed Adidas Rockstars event held in Austria.  The red-hot Anna Stöhr and Dmitry Sharafutdinov, both fresh off winning gold at the World Championships, came out on top of a relatively deep invite-only field.  Americans Alex Puccio and Alex Johnson both acquitted themselves nicely finishing 2nd and 4th respectively.  If you didn’t get a chance to watch the comp as it unfolded there is a cool replay tool available on the event’s website that is worth checking out.  Take a look at the banner along the top to see the kind of companies that were behind this event…