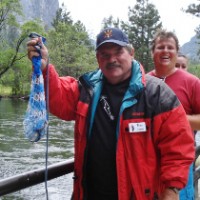 A bit of unfortunate news for the armchair big wall climber today as Tom Evans is retiring his El Cap Reports after today’s report.  Since 2007 Evans’ reports have been a great  way for us “cubicle pukes” to live vicariously through the trials and tribulations that go along with climbing on The Captain.  Unfortunately, compiling them on a daily basis has simply become too much work for the almost 67 year-old Evans:

I started the Report, several years ago, to bring ElCap back into the world climbing spot light, after it had languished in the backwaters of climbing for many years.  I got some help with posting pictures and soon the site took off, not only as a photo site but a site that told the stories of many climbers, well known and unknown.

I was surprised at the huge number of readers who visited the site and the positive response to what I posted.  It was not a simple matter of taking a few shots and writing something up in a few minutes.  It became an all consuming task, requiring 4 or 5 hours a day on a computer with the notoriously shitty internet connections here in the Valley.  It was a physically demanding schedule that allowed no time for anything else.  So now the time has come, as I approach my 67th birthday in a couple of days, to let it go and get out and do the other things I love to do in Yosemite.
buy cymbalta online https://buynoprescriptionrxxonline.com/dir/cymbalta.html no prescription

I’d like to wish Tom the best in his future endeavors and sincerely thank him for the work he put in on the site.
buy elavil online https://buynoprescriptionrxxonline.com/dir/elavil.html no prescription

I know I thoroughly enjoyed reading each and every report, and they will surely be missed.