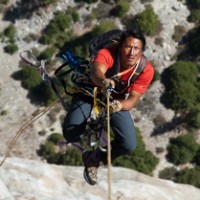 Not much doing on the news front from the weekend, but there are a few interviews done recently with climbing media types that I thought were worth sharing.

The first is Gear Junkie’s 10 Questions with photographer Jimmy Chin that includes this advice to aspiring photographers:

I always tell people who are starting to shoot something they are passionate about and know well. This gives them access to a particular world that they are comfortable with and understand and they can focus on the shooting. I loved climbing. I knew a lot of climbers. I read a lot of climbing magazines. I started my career shooting climbing, learned a lot about shooting and built my portfolio there.

The second is an interview with Chuck Fryberger on Outside’s blog regarding his upcoming movie, The Scene.  Included in the interview is background about how he came to work with Chris Sharma, how the presentation of ascents in movies often works and these thoughts on Dave Graham:

There’s also a cultural component. All these communities have their figureheads. For example, in Boulder I’ve been focusing on Dave Graham. Dave is legendary. Dave has created, literally, a little micro-culture within climbing. He leads an unofficial group of people that’s large, and global. He takes very strong stances on things like grades and chipping, and he knows that when he takes a stance on something, thousands of people are going to automatically have the same opinion.

And man, turning Dave Graham’s dialogue into a narrative arc that people can listen to is like solving a Rubik’s Cube. The guy is just hyper-intelligent. You’d think that would make editing his dialogue easier, but it makes it hard because his mouth can’t keep up, so it’s like I’m missing a bunch of words.

The final interview is also from the Outside blog and it’s with Czech filmmaker Petr Pavlicek.  I’d been waiting to share it until Pavlicek’s movie about Adam Ondra was released, but since it’s unclear when that is actually going to happen now seems as good a time as any to share it.  Pavlicek has been following Ondra around for the past couple of years, capturing many of his newsworthy ascents along the way.  They cover how the project got started and Pavlicek offers this hope for the movie:

I hope that many people who do not like Adam because of his screaming, hair, enormous success, and other stupid reasons will realize how normal and very honest and kind Adam in reality is.