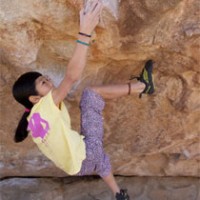 A couple of weeks back I mentioned that Big Up Productions was out in Hueco Tanks documenting 9 year-old Ashima Shiraishi’s spring break.  In a recent update on their blog they provide more details on what was a pretty amazing trip.

Shiraishi managed to repeat a handful of double-digit problems, but what is perhaps most impressive was her near send of the classic V12 power endurance problem Shaken Not Stirred aka Martini Right.  According to their post she came close to sending the problem 3 times only to have the ascent invalidated by dabbing on a small tree that grows near the problem:

On her second day working the problem she sent through the crux but her feet swung out on the last hard move and banged a tree. She continued to the top, but the “dab” made the ascent invalid.  How harsh is it to have to tell a nine year old that the most impressive thing she’s ever done doesn’t count? Twice more she climbed through the crux and kicked the tree, virtually sending the problem three times in a row. It was painful, there were some tears, and she left without completing the official ascent. But it was still one of the raddest things we’ve seen in a while.

The footage of Shiraishi’s trip is the 3rd installment of the Evolv and Mountain Gear-sponsored Origins series, and it will be featured as part of the 2011 Reel Rock Film Tour.

29 Responses to More On Ashima Shiraishi’s Trip To Hueco