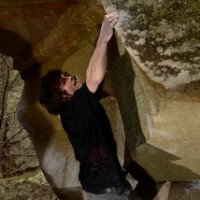 The final stop of the 2010 Triple Crown Bouldering Series took place last weekend at a soggy Stone Fort outside Chattanooga, TN.  In addition to the normal difficulties associated with trying to climb your 10 hardest problems within the course of the day competitors were faced with wet topouts and conditions that became dangerous to the point that comp organizers were forced to end the event a bit early.  The day was not a waste, however, as many boulders did get climbed and a pair of familiar names once again topped the field.

Not mentioned in any of the results is Daniel Woods who made the trip out for the comp and nabbed quick sends of The Shield (V12), The Chattanoogan (V12) and Flying High (V11) according to his 8a scorecard.

Here are the final results for the Open divisions with full results available at the Triple Crown’s website.

Check out Adam Johnson’s website for a nice gallery of pictures from the comp.