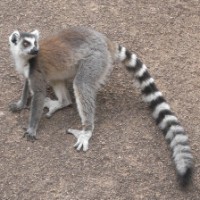 Adam Ondra (not pictured) took a break from school at the end of last month to go to Madagascar of all places and, as usual, he did not leave empty-handed.

Notable among Ondra’s successes was the first complete one day free ascent of Tough Enough, a 10 pitch route with sustained difficulties up to 5.14a or b on the east face of Karambony in Madagascar’s Tsaranoro Valley.  Ondra onsighted 8 of the pitches with the other 2, both 5.14a, going down on the 2nd try.  He would return a few days later to climb the route free once again, this time doing the original line for pitch 8 which weighs in round 5.14b.

In an interview with UKClimbing Ondra details the tactics he used to avoid the midday sun, his thoughts on the possibility of doing even harder multipitch lines and he gives credit to the people who laid the groundwork for his ascent:

Thanks to all guys who had the vision to open Tough Enough and Pietro for the belay and all the work he made for me up there.

In addition to freeing Tough Enough, Ondra did the first free ascent of Mora Mora, a 12 pitch route with less sustained difficulties up to 5.14a or b, and he also redpointed Bravo les Filles, a 13 pitch 5.13d that was done mostly free by the team of Lynn Hill, Beth Rodden, Nancy Faegan and Kath Pike in 1999.

You can read a more about Ondra’s trip at PlanetMountain and the aforementioned UKClimbing interview.

To give you some idea what the climbing is like on Tough Enough, here’s a trailer from a film Laurent Triay made about a trip he took with Stéphanie Bodet, Sylvain Millet and Arnaud Petit to attempt the route back in 2005: