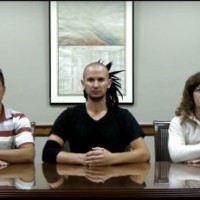 It’s not uncommon when perusing reports about big expeditions to Patagonia or the Himalayas to read about people scrambling and bouldering on the small rocks before hitting bigger objectives.  What you don’t read much about, however, is people making bouldering their sole reason for traveling to these remote destinations.

Enter the team of Jason Kehl, Abbey Smith, Pete Takeda and Mick Follari who embarked on a trip to the Zanskar region of the Indian Himalayas last month with one goal in mind:  search for yeti find and develop boulders.  Here’s how Kehl described the concept of the trip in an interview with ClimbTalk radio shortly before they departed:

We’ve always liked high-alpine bouldering and we wanted to take it a little farther.  And there’s never really been a trip as extreme as a mountaineering trip where they have porters…we have a cook, horses to get all of our stuff out there.  We’re going to drive as far as we can and then we’re going to hike for two more days and set up base camp at that point.  So, it’s kind of like what a lot of people do all the time for mountaineering, but it’s never been taken to the bouldering aspect of the sport.

With a few weeks left out in the field updates from the crew have been in the form of text updates on their Facebook page, and I’m sure we’ll be seeing and reading a lot about their adventure once the team returns.  Until then, here is a video that introduces the team:

Zanskar Odyssey from CryptoChild on Vimeo.

This fall, Colorado climbers Pete Takeda, Abbey Smith, Jason Kehl and Mick Follari journey to that lofty crossroads where continents meet, ancient cultures mingle, and great religions clash — the kingdom of Zanskar in the Indian Himalayas. They’re looking for adventure, a fresh perspective, and the most aesthetic boulders in the world’s greatest mountain range. It’s a postmodern blend of traditional expedition climbing and new school bouldering –it’s a search for the highest hardest climbing moves in the world.