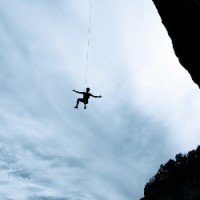 Jonathan Siegrist, who made news in recent years for his quick repeats of various 5.14 sport routes, laid out in a post on his excellent blog how he has, in fact, had some long-term projects over the years.  His progression through the 5.14a-c grades led him to project and send three Tommy Caldwell routes in Colorado’s Frontrange:  Sarchasm on Long’s Peak, Grand Old Opry at the Monastery and Vogue at Eldorado Mountain’s Industrial Wall.  For his first foray into the 5.14d grade range Siegrist then set a goal of repeating another Tommy Caldwell route:  Kryptonite (5.14d) at the Fortress of Solitude near Rifle, CO.

I guess the definition of long term project varies by the person as less than two weeks from Siegrist’s initial attempts on the route he found success:

It went just like I wanted it to- perfectly. Every movement, rest sequence, foot placement and clip was executed in the very same way that I had been dreaming about. It was as though I had just rehearsed the route in my head, move for move, but this time the emotion of victory was real. This achievement represents an important breakthrough for me and I hope that it’s just a stepping stone to whatever may come next.. A whisper of a goal from years ago, became realistic, and then was accomplished. I could not be more stoked!!

Siegrist then finishes his post with an excellent reminder:

I hope that I can share my excitement about this breakthrough with my community, and most importantly- inspire YOU! to crush whatever may lay in your path!!!!!