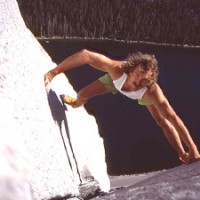 German climbing legend Kurt Albert is in critical condition in a German hospital after falling some 60 feet from a via ferrata in Bavaria on Sunday.  There are conflicting reports about his condition, but either way the situation sounds very serious.

The 56 year-old Albert has had many notable achievements over the years, but his most lasting contribution to the sport of rock climbing may be his coining of the term rotpunkt or redpoint which came about in the mid-70’s when Albert would put a red dot under routes he had successfully climbed.

Update: Here’s a 1993 interview Rock & Ice did with Albert that they posted on their website

Update #2 – 9/29/2010: Unfortunately Albert passed away yesterday due to injuries sustained in the fall.  My thoughts are with his family and friends.  Planetmountain has a nice obituary.