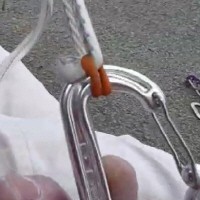 Over the weekend there was a tragic accident at West Virginia’s New River Gorge where a woman fell to her death from the anchors of a route she was preparing to clean.  While the exact details are not clear, the informed speculation is that the potentially incorrect usage of  Petzl STRINGs on both of the woman’s anchor slings could have caused the accident.

The scenario is a bit hard to explain in words, but this video does a pretty good job of depicting what can go wrong when you use rubber bands or something like the Petzl STRING on open webbing slings.  There is also this explicit warning on the Petzl website that shows what can go wrong as well.

I don’t think I’ve ever used this kind of setup personally, but I’ll admit that I never realized the possible consequences of it either.  Hopefully this sad story can at least have the positive effect of helping people avoid this potentially dangerous scenario.

Obviously none of this speculation will help ease the pain of those who knew this woman.  My thoughts are definitely with them in this tough time.

Leave a Reply to paulo Click here to cancel reply.