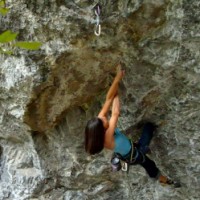 5.14b FA By Jacinda Hunter In Utah

According to her 8a scorecard, Jacinda Hunter has done the first ascent of a long-standing project in Utah’s American Fork Canyon suggesting a grade of 5.14b for the route she is calling Fantasy Island.  In and interview with Hunter done by DPM earlier this year she had this to say about the then project:

The “project” is something I had been working for months. Just before all the snow, I actually fell off the very last move on the route. It was heartbreaking to be so close and then have to take a break from it. But I figure it’s not going anywhere so I hope to get back there in a few weeks. That route is very different climbing because it is steep. It has small holds for the angle and once you pull on, there is no rest. I have to just power through right till the end. It’s a total power endurance fest climbing out the cave

This is Hunter’s 2nd 5.14b, the other coming last year when she did  the FFA of Breaking The Law at southern Utah’s Black and Tan.

6 Responses to 5.14b FA By Jacinda Hunter In Utah