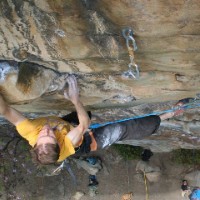 Potential New 5.14b At The New River Gorge

On the heels of completing the new New River Gorge guidebook and in the midst of a serious house on wheels construction project, Mike Williams has opened a potential 5.14b in West Virginia’s New River Gorge.  Dubbed Trebuchet, Williams’ line tacks a hard boulder problem and a pumpy redpoint crux on top of an existing 5.13b to create a 100 foot pitch of “simply unbelievable” climbing.  Williams is admittedly unsure of the grade but has proposed 5.14b:

I think this route is 14b. It is the hardest route I’ve done and one of the hardest I’ve tried which makes it hard to grade. the only route I’ve spent time on that’s harder is also a project so I have no idea how hard this route actually is. It may be 14a. I tried to compare it to many different routes in many areas to tack down a number. It is for sure a big step harder than Proper Soul (5.14a). It is harder than Mango Tango (5.14a).

With the likes of Chris Sharma, Joe Kinder, Chris Lindner, Matt Wilder and Nick Duttle scheduled to appear at the New River Gorge for this weekend’s New River Rendezvous it will be interesting to see if anyone will get on Trebuchet and give Williams a second opinion.  If not this weekend then Williams isn’t so optimistic:

Again, regardless of the grade, this is certainly one of the finest pieces of rock I’ve ever touched.  I’d say it’s destined to be a classic but due to it’s location at the New River Gorge it will probably never get climbed on.  Maybe someday people will wake up to how good the hard climbing is here.  We’ll see.

Check out Williams’ blog for the full rundown (including pictures) of Trebuchet.

And since we’re talking about the New River Gorge now seems like as good a time as any to repost this classic footage of Joel Brady repeating Mango Tango at the New.  I can still remember seeing this for the first time on ClimbXMedia back in the day.  Such a fun looking line!

Update: In the comments Mike Williams also points out that Pat Goodman established a new 5.13+ trad route called Acharya the same day he did Trebuchet.

6 Responses to Potential New 5.14b At The New River Gorge