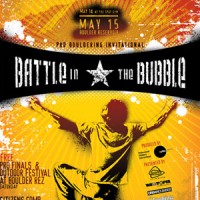 Battle In The Bubble Live Broadcast This Saturday

Another weekend, another big bouldering comp on the schedule.  Just a couple of weeks after the 2010 Earth Treks Roc Comp and 3 weeks before the World Cup event at the Teva Mountain Games is this weekend’s Battle In The Bubble in Boulder, CO.  After a semi-finals round at The Spot that will include 20 “Wild Cards” and a handful of select “Pro-Invitees” the finals will pit the remaining 10 climbers of each gender against each other in an innovative “elimination/1st ascent” style finals outdoors at the Boulder Reservoir.

Following in the footsteps of recent comps the finals for Battle In The Bubble will be broadcast live online at The Spot’s website beginning at 7:15 MDT Saturday night.  The live stream will be produced by Sender Films.

The preliminary running order for semi-finals has been posted here with the Wild Card slots to be filled in after a qualifying round tomorrow at The Spot.  Paul Robinson (ankle) and Alex Johnson (World Cup in Switzerland) are notably absent from the running order, so it will be interesting to see if anyone can step up and challenge clear favorites Daniel Woods and Alex Puccio.

This video has a few more details on the schedule for the weekend:

Battle in The Bubble @ The Boulder Res from Adam Broadbent on Vimeo.

Posted In: Competitions, News
Tags: Battle In The Bubble

← Near Onsight Of 5.13 Multipitch By Tommy Caldwell
The Insiders: A New Short From Big Up Productions →

8 Responses to Battle In The Bubble Live Broadcast This Saturday