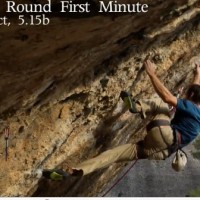 In the past week there has a been a lot of talk about Chris Sharma and his First Round First Minute project in Margalef, Spain.  Is it cool for him to decide who can try it?  Is it not cool?  Everyone seems to have an opinion.  What hasn’t been discussed lately is how Sharma’s efforts to actually climb the line are going.

TheLowDown posted a nice interview with Chris Sharma (originally done for the excellent French site Kairn.com) where he discusses in depth his efforts to climb First Round First Minute:

For You, what is lacking for you to do FRFM and this last move?
I’ve fallen a lot of times at this last move. It’s not very hard, around 7B+ boulder, but it comes after 25/30 moves of pure resistance. It’s a bouldery route, with a lot of hard moves you must link. But the problem is more resistance for me. Really extreme, but a perfect project that I dream to realize.

Your problem with the route is more mental?
Yes, it’s a mental problem. After 30 falls on the same and last move, it’s a real head fuck… It’s not like falling in the middle. When you fall, you have made all the effort of doing the other moves of the entire route. It’s very frustrating! I need to go away a little from the route, to climb at Oliana with Daila, to bolt new lines. To mix all the things, to regain my spirit. It’s not good to try the same route over and over, for too long… I have spent several months on FRFM. Now, I need to take a break because I’m starting to feel a mental block. It was good for me to climb the left variation, for releasing some of the pressure. I’ve finished a part, it remains to finish the whole route.

Read the rest of the interview here