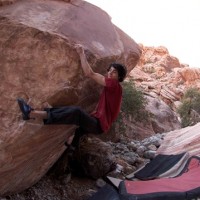 Red Rocks is well-known for its amazing sport and trad climbing with towering walls of red sandstone stretching for miles across the Nevada desert.  Fortunately for those of us that enjoy climbing smaller rocks, the basins and gullies of Red Rocks are littered with boulders perfect for bouldering.

While bouldering has been going on in Red Rocks for some time, recent years have seen its popularity as a destination for hard bouldering increase quite a bit.  The efforts of locals and visiting climbers alike have yielded several new classics up to V13 and a bouldering guidebook was released in 2008.

This new development has lured many of America’s strongest climbers to Red Rocks with the likes of Jon Cardwell and Daniel Woods stopping by in early 2009 and Paul Robinson making his first trip as 2010 began.  Over the course of his 2 week stay in Vegas Paul managed to sample some of the existing problems in Red Rocks while also adding 2 new V13s of his own.  I caught up with Paul to get his take on the bouldering in Red Rocks as well as his impressions of the problem Lost In The Hood (V14) from his stop in Arkansas:

As for Lost In The Hood, an amazing line!  The wall itself is an extremely long cliff band and nearly all of the wall is completely blank with one section of holds at the far left and lost in the hood maybe 40 feet to the right.  It is a pure line and starts on a jug and a crimp that is not to good but the only logical starting left hand.  From that hand position it is one extremely difficult deadpoint to a sloping lip type hold.  Once on it, it feels decent, but getting the distance and being able to hold on going so fast is what makes the move so difficult.  After that initial move, it is a very technical v10 to the top!

As for the FA’s, the first (The Grand Hustle) was a right exit to an already established v10 (Vigilante).  The exit adds in around 6 moves and the crux is very reminiscent of the crux move of Terre De Sienne in Hueco, though slightly easier. The other line (Meadowlark Lemon) is much cooler and is on a beautiful tiger striped boulder deep in the Kraft Wash.  It was thought to have been impossible, however Pete Lowe and I decided it totally went and had figured all the moves out in a matter of a few days.  I managed the stand start and thought it to be about v13.  The sit though is the prize!  I am heading back there in Feb to try and finish the line up!  The climb itself is an amazing arete that is both technical and powerful.

The guidebook to Red Rocks is pretty basic and stops at v12.  However, there is so much potential there for grades way beyond v12.  The book gives a very nice description to different areas with hardly any developed climbs and projects galore which was a great addition to people coming to Red Rocks looking to put up tons of great first ascents. 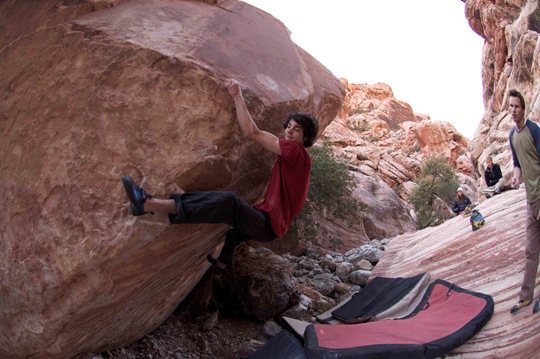 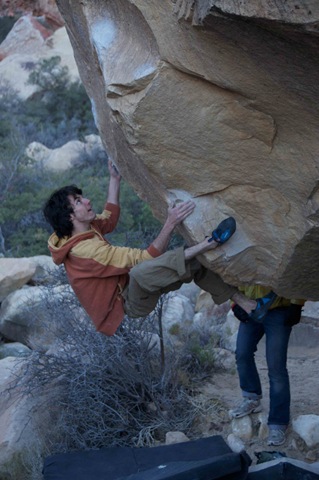 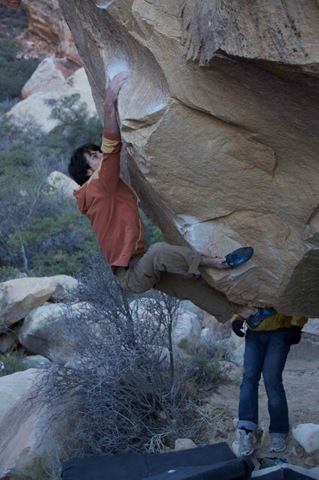 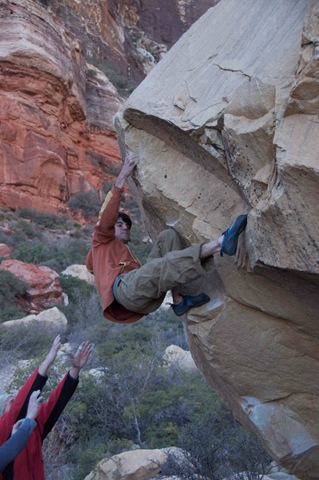 And finally, here is a nice profile piece Chuck Fryberger put together about Paul that features him sending Big Worm (V14) at Mt. Evans and Terremer (V15) in Hueco Tanks.