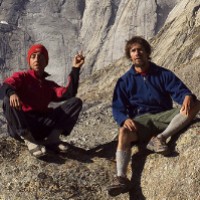 Alpine climbing is not really the main focus of this blog, but its something I’ve long been interested in.  The images and stories brought back from remote mountains are something I think any person with a sense of adventure can appreciate.

Unfortunately 2009 provided many stark reminders of the dangers associated with mountain adventure, most notably the loss of Jonny Copp, Micah Dash and Wade Johnson in China.  Hoping to preserve their memory and inspire other small teams to share their adventures, the American Alpine Club recently announced the $20,000 Copp-Dash Inspire Award:

Jonny and Micah believed the summit meant something, but style was everything. They pursued climbing in the same manner they lived—with vigor and passion, and with a strong desire to share their adventures with the rest of the climbing world through photographs, videos and slideshows. The Copp-Dash Inspire Award has been formed, therefore, to support climbers who choose to follow a similar path, both in life and in the mountains. The fund’s goal is to assist climbers before, during and after expeditions with financial grants and multimedia instruction to help empower them to share their current and future adventures with a wider audience.

Sponsored by Black Diamond Equipment, La Sportiva, Mountain Hardwear and Patagonia, and with in-kind support from Adventure Film Festival, Alpinist Magazine, American Alpine Club and Sender Films, the Copp-Dash Inspire Award will help support small teams tackling difficult climbs in the great mountains of the world who plan to personally document and share their ascents through a multimedia blend of storytelling elements.

Entries will be accepted until March 31st of this year.

Leave a Reply to Eli Click here to cancel reply.