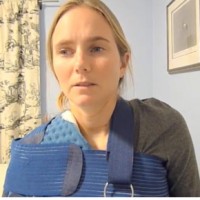 Coming off a successful 2008 in which she redpointed her hardest route, Meltdown (5.14 trad), Beth Rodden has been mostly under the radar in 2009 as far as the online climbing world is concerned.  As the title of this post indicates, this update is unfortunately not about her doing something noteworthy out on the rocks.  Rather, it’s to share news that Rodden joined a growing list of well-known climbers to have surgery on their shoulders in 2009.

Writing on the Petzl blog, Rodden shares the progression of her injury the past 6 months that ultimately led to her decision to have surgery:

I tore my labarum in June of 2009 while bouldering in Yosemite. The boulder problem that I tore it on is fun, but far from spectacular or memorable, which seems to be typical for me (I tore my ligament in my finger on the purple problem on my woody). But, none the less, I found myself deciding to rest for 6 weeks and then try and rehab and climb with the labarul tear. I went on an amazing trip to South Africa and thought I was coming back stronger than ever until I hurt a pulley on the opposite hand. While trying to favor the left hand and the right shoulder, I realized that my shoulder prevented me from climbing a variety of styles.  Yes, I could climb vertical finger cracks, where my hands were always in front of me, but as soon as I tried wide cracks, gastons or steep climbing, my shoulder held me back, and I was faced with a very tough decision.

One thing that I have always envisioned in my life is climbing. Ever since I started climbing fifteen years ago, I cannot imagine a future without some sort of climbing. And in the end, I decided that longevity of climbing in my life far outweighed the six months or a year this might take me to recover from.

I emphasize that last part because I think it’s a particularly salient point.  The struggle between resting more vs. climbing through an injury is something I think we’ve all dealt with.  Surgery is the worse case scenario obviously, but in some cases it is the best long-term option as Rodden points out.

Here is a brief video Rodden put together about her surgical experience.  Don’t click play if you are averse to seeing medical situations.

Best of luck to Beth in her recovery.

BTW, while surgery sucks those warm blankets they give you during surgery are amazing!

11 Responses to Beth Rodden On The Road To Recovery