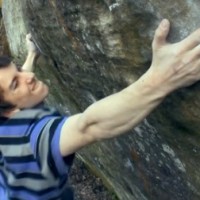 I think it’s safe to say that Ty Landman had an above average stay in Fontainebleau earlier this year when he dispatched numerous classics in the forest up to V14/15.  The trip was so successful that according to at least one source it caused Landman’s motivation for hard climbing to wane.  Indeed, other than a few random sightings on Phil Schaal’s blog Landman has maintained a pretty low profile since his trip to Font.  But I digress…

Capturing many of Landman’s ascents in Font on film was Keith “Uncle Somebody” Bradbury.  You may remember Bradbury from his online film 85 Days In Fontainebleau, something I highly recommend watching if you haven’t already.  Hard at work editing the latest footage, Bradbury put together a pair of teasers (seen below) for an upcoming (and as of yet unnamed) DVD project Between The Trees, which he introduced with these words:

When success is all around it drips into you and it pulls you upwards, allowing your imagination to run wild and sometimes your body blindly follows. This was how it was for me spending those weeks with Tyler in Fontainebleau. Nothing seemed impossible, only difficult. Although, for Tyler it seemed as though nothing seemed difficult, only mildly challenging. We quested around a lot of areas as I showed Tyler what I consider to be the best of bleau, and he mopped it all up. Some problems were added to the list and some were inevitably erased, but the result is a whole host of 5 star problems.

This film will hopefully represent the very best of Fontainebleau. The classics, the hidden gems, the hardest, and the most beautiful. There is footage of a great number of hard problems, some of which have never been seen on film, so I expect that everybody will see a problem that they either don’t know or have never seen climbed. Once again, the bottom line will hopefully be inspiration. Inspiration to go climbing, to visit font, and to have fun in pursuit of what we’ve all chosen to make a big part of our lives. If it manages to do that then it’s measured as a success in my book.

Check out the teasers: