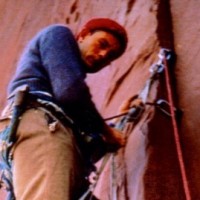 “What would Fritz do?” As in, what would legendary climber Fritz Wiessner do?

This is the question Old School and I pose to each other at the crag whenever we feel as though we are losing our mojo.  It’s basically a means of remembering the inspiring actions of the climber’s in generations gone by who laid the foundation for today’s climbers.  Compared to the obstacles they faced in pioneering the sport of climbing, whatever minor problem we are having likely pales in comparison.

While all of us tread in the footsteps of groundbreaking climbers of past generations, it’s not often that we have the opportunity to give back to them in a meaningful way.  Take, for example, the case of Layton Kor.  He did a countless number of first ascents in the 1960’s that paved the way for future climbers.  Now is our turn to give back.

Unfortunately, Kor (now 70) has been suffering from both kidney disease and the associated high costs of fighting said disease.  Writing on his excellent About.com blog, Stewart Green outlines both the history behind Kor and the current battle he faces:

Layton’s marks are everywhere—the second ascent of The Salathe Wall on El Capitan in Yosemite; the second ascent of The Diamond in Rocky Mountain National Park; a new route on The Eiger North Face in winter; first ascent of Castleton Tower and The Titan near Moab, Utah; countless first ascents on his home cliffs around Boulder, Colorado; and even new routes at The Gunks in upstate New York and Ragged Mountain in Connecticut. Everyone who has been a serious rock climber for the past 40 years has been following in Layton Kor’s giant footsteps.

Now, however, Kor suffers from kidney disease and is having difficulty meeting all his copays and deductibles for dialysis treatments, drugs, and a future kidney transplant. Back in the spring I began selling signed photographs of Layton Kor from his 1963 first ascent of Monster Tower in Canyonlands National Park and donating the funds to him to help out.

In order to take the fundraising efforts to the next level Green has teamed up with Steph Davis to start a website laytonkorclimbing.com.  With the support of companies like Marmot, Five Ten, PrAna, Mammut, MSR/Thermarest, Clif Bar, The North Face, and Backcountry.com they put together several nice packages that will be given away through monthly raffles.  In addition, they have the following guided climbs that can be won as well:

Head over to the Layton Kor Fundraising Site to see how you can win these prizes for as little as a $25 donation.