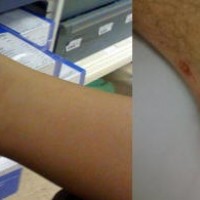 Treatment Of Climbing Injuries Increases 63% Since 1990

Not exactly surprising considering the explosion in the growth of the sport, but a recent study found a 63% increase in the number of rock climbing-related injuries treated in emergency departments between 1990 and 2007:

The study, published in the online issue of the American Journal of Preventive Medicine, found that over 40,000 patients were treated in U.S. emergency departments for rock climbing-related injuries between 1990 and 2007. The most common types of rock climbing-related injuries were fractures (29 percent) and sprains and strains (29 percent). Lower extremities were the most common region of the body to be injured (46 percent) while the ankle was the most common individual body part to be injured (19 percent). The study also found that women accounted for more than 28 percent of the injuries, a higher proportion than found in previous rock climbing studies.

Falls were the primary mechanism for injury with over three-quarters of the injuries occurring as the result of a fall. The severity of fall-related injuries correlated with the height of the fall. Patients who were injured after falling from a height over 20 feet were 10 times more likely to be hospitalized than patients who were injured falling from 20 feet or lower.

“We found that the climbers who fell from heights higher than 20 feet accounted for 70 percent of the patients there were hospitalized for a rock climbing-related injury,” explained study author Lara McKenzie, PhD, principal investigator at the Center for Injury Research and Policy at Nationwide Children’s Hospital and faculty member of The Ohio State University College of Medicine. “This trend, combined with the fact that rock climbers have a higher hospitalization rate than other sports and recreational injuries, demonstrates the need to increase injury prevention efforts for climbers.”

Given the nature of the sport it’s obvious that lower extremities injuries would make up the bulk of injuries requiring a trip to the hospital.  However, women accounting for 28% of the injuries is a bit intriguing.  Does this disproportionate level of injury have to do with (usually) more experienced male partners somehow abdicating in their safety duties when climbing with (usually) less experienced female climbers or is it something else?  Given my track record of injuring a certain female climbing partner of mine I’m not sure I’m qualified to comment.

The other part I found interesting was the assertion that climbers are hospitalized more often than other sports and that 70% of patients hospitalized fell from greater than 20 feet.  If you think about it, a 20 foot fall is not that run out at all!

The moral of the story:  don’t become a statistic, be safe out there!

Update: You can read the full study here

12 Responses to Treatment Of Climbing Injuries Increases 63% Since 1990