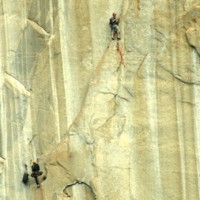 Before the weekend got carried away with that small little bouldering comp in Vail and the unfortunate news from China I meant to provide an update on the latest news from Alex Honnold.  After an expedition to Borneo this Spring he returned to the playground of Yosemite Valley to ply his trade on the big stone.

As far as speed ascents go, I’m somewhat inclined to agree with Peter Beal’s take, especially with respect to the safety aspect:

I am ambivalent about speed climbing on a lot of levels and this ascent is no exception as the only real way to cut free climbing time substantially is essentially to solo long sections of the climb by simul-climbing with little protection. Alex is the only climber I know of who has the ability to climb at that level without a rope way up there on a big wall as his solo of Half Dome made clear. However the margin for error on climbs done in this style is exceptionally thin and the consequences of failure correspondingly drastic. His reply to the question of soloing Freerider was refreshingly candid but the fact that the question keeps coming up in climbing media is kind of scary.

Speaking of that question about soloing Freerider, when asked in a Q & A with Climbing.com specifically about the prospects of soloing something on El Cap Honnold reassuringly had this to say:

Ha! You go up on the Salathé headwall and talk about soloing. That shit’s just too hard. And just the position is scary.

Not finished, Honnold was spotted last week by the camera of Tom Evans making a fast ascent of Tangerine Trip, also on El Capitan.

Tangerine Trip:  A party was seen on the 5th pitch as I arrived at 10am and have hustled along without any bags and only a day pack for freight!  This is your classic “push”.  No sleeping gear, etc, etc.  They are moving along rapidly and by 4pm were heading up the corners in the middle of the route.  Who are these guys?  I hope they get a sub 24 hour ascent, as they are certainly capable by the look of it.

And on the free soloing front, James Lucas sent an e-mail to Rock & Ice detailing some of Honnold’s more notable exploits, starting with a repeat solo of Astroman (Grade V, 5.11a variation):

He started around 8 or 9,” Lucas wrote, “and passed a few parties on the route. He was back at the Awahnee well before noon. I think he said it took him an hour and a half. This time he skipped the boulder problem and climbed the 11- corner. He also took the 10c variation towards the top. Later in the day he soloed the Northeast Buttress of Higher Cathedral Rock, a Grade IV 5.9, and he soloed Serenity to Sons, a Grade IV 5.10d. He was gonna solo the Crucifix, a 12b grade IV on Higher, but he wimped out. It was too hot on the Mary’s Tears start, he said. He really just wanted to update his facebook status at the Awahnee and couldn’t be bothered with another time-consuming solo. You can quote me on that.

Next up for Honnold is a trip to a festival in the western Sayan Mountains of southern Russia where the focus will be Mt. Belukha AKA “Russian Yosemite”