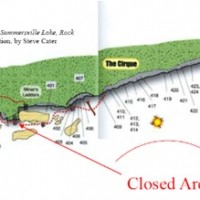 In areas like Colorado’s Frontrange seasonal crag closures to accommodate nesting birds are an accepted fact of life, but a recent closure in West Virginia has the locals buzzing.

Writing in a blog entry on 8a.nu, Porter Jarrard outlines how the National Park Service temporarily closed an area in the New River Gorge known as The Cirque due to a pair of nesting peregrine falcons.  The Cirque is notable among climbers for having the highest concentration of hard sport routes at the New.  You can get a better idea of its size and scope by watching Chris Sharma onsighting the route Proper Soul (5.14a) in this video at MVM.  The Cirque is also used by many other user groups like hikers and bird watching aficionados.

The main issue the local community seems to have with the closure is the lack of communication between the NPS and the various user groups that utilize the amazing resource that is The Cirque.  Apparently there was no warning or discussion before this closure took effect.  You could debate whether or not this is a problem, but the fact that the NPS and the climbing community have had a positive relationship in the past makes it all the more frustrating.  Check out the thread on 8a.nu for Jarrard’s full take on the issue as well as the opinion of a few other local climbers.

4 Responses to Interesting Closure At The New River Gorge